Defending an invincibility of 15 matches, Atletico Madrid faces this Saturday, December 16, the ascendant Alavés. The match is part of the schedule of the sixteenth round of the Spanish Championship edition 2017/2018. In the Wanda Metropolitano stadium, the game is scheduled to start at 18h (Brasília time).

The recent performance of Atletico Madrid

Three consecutive victories in the last rounds of LaLiga have made Atletico Madrid reduce from ten to six points their difference against Barcelona, ​​leader of the tournament. The two are the only ones still unbeaten in the Spanish Championship. The capital’s team has 33 points (nine wins and six draws).
In this trajectory once again has as landmark his relentless defense. With seven goals conceded is the least leaked of the tournament next to Barca. However, as it is not news to its fans, the difficulty in putting the ball in the net of the adversaries continues disturbing the Atletico in the attempt to raise higher flights.
This difficulty manifests itself more strongly against teams that play closed. It was in the Champions League, when the Spanish team squandered four points against Azerbaijan’s Qarabag and ended up being eliminated in the first round of the tournament. Now, he will have to play in the Europa League in the second half of the season.
The problem also appears in the Spanish League, when Atlético play at home and needs to pressure opponents to get back to three points. In the six games played so far, only managed to win in half. In the other three he had to settle for equality. For this reason, he is only the ninth best president of LaLiga.
In Wanda Metropolitano, he scored only seven goals. It is the worst offensive performance in comparison with the ten teams that have the best campaign in their domains in the Spanish Championship.
That’s why the fans are counting the days for the January arrival. After a year without being able to contract due to the suspension applied by Fifa (International Federation of Soccer) motivated by the irregular process of capture of talents for its divisions of base, the team will finally be able to register new players.
Already went shopping and hit with Chelsea the return of the Brazilian naturalized Spanish Diego Costa. Although the transaction is closed, the athlete still can not be enrolled. Thus, Antoine Griezmann (12 games in the Spanish Championship, five tries) ends up being very isolated and has had problems to make the expected goals. For the game this Saturday, there is doubt, even if it will be scaled.

A thigh injury took him out of the game against Betis in the previous round in Sevilla (Atletico won 1-0). It still depends on a new medical evaluation to know if it will be released to act. During the week, however, he gave good news to the fans. He said he will stay at the club until the end of the season. His name had been embroiled in several transfers rumors in January, especially for Manchester United. But the athlete has put an end to this wave.
Despite the many criticisms received, Griezmann is not the only one who has scored fewer goals than expected in Atletico’s attack. Also Frenchman Kevin Gameiro scored only three times in all nine matches of the tournament in which he was called. Even worse are the numbers of veteran Fernando Torres. In ten games he did not score a goal. The Argentine Luciano Vietto, who would be an option to the pair, has played in six matches and also has not shaken the network of rivals.

The current form of Alaves

After a disastrous start to the season, Alavés changed coaching and showed immediate improvement. He made a series of three victories, two for the Spanish Championship and one for the King’s Cup.
Still can not get out of the relegation zone. With 12 points (four wins and 11 losses), the only team that has not even drawn a tie so far in LaLiga is three points away from La Coruña, seventeenth and first out of the sticking zone. However, under the direction of Abelardo Gonzalez clearly signals that he is able to rise in the standings.
To face Atletico Madrid, Abelardo has doubts about two players who can be considered holders. The Brazilian defender Rodrigo Ely (13 matches in the Spanish 2017/2018 Championship, without a goal) and striker Ruben Sobrino (eight matches, no goal) are in the ward for injury treatment.

History of the matches Atlético de Madrid vs Alavés
There were only eight matches involving Atlético de Madrid and Alavés, but the latter takes advantage of the duel. Won three times. The team from the Spanish capital has won twice. The ties were three, including the two games of the previous season of LaLiga.

Although it is long, the unbeaten series of Atletico Madrid is not impressive. Of the list of 15 games without defeat, more than half (eight) finished in equality. However, the team showed a recent improvement. In the last eight matches, he has won six. Therefore it should be pointed out as the most suitable betting option for this Saturday’s match. It has a price of 1.18 in Rivalo. Draw shows return of 6.50 and victory of Alavés pays 16.00 per real bet.

END_OF_DOCUMENT_TOKEN_TO_BE_REPLACED 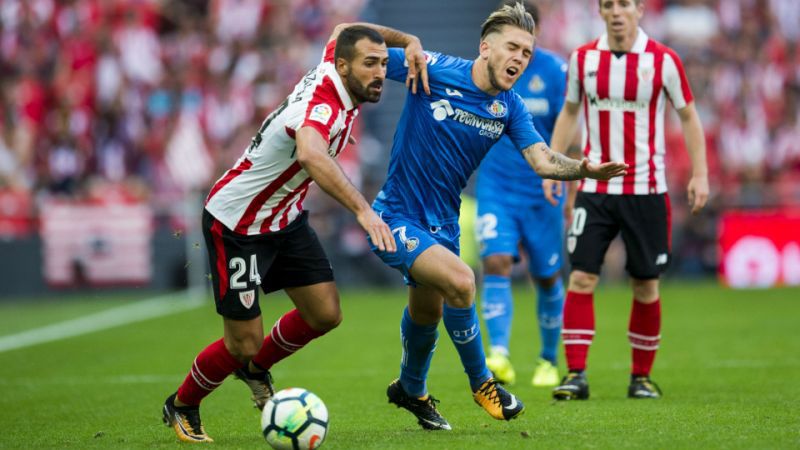